Smartphone usability and my parents 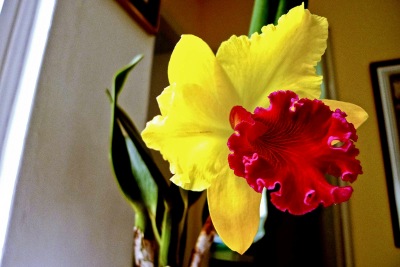 I just watched my mother try to take a photo with her Nokia smartphone for the first time. An orchid in the home was blooming, and it was the closest camera within reach. She only uses it as a regular phone, and as the least technically-minded member of the family, is strangely the only one not using an iPhone. Needless to say, she was baffled by the Symbian OS. A primary hardware feature on the device, and the icon was buried in a submenu. Afterwards, she asked my father where to find the file so she could email it to herself, and he couldn’t readily answer her.

His last phone before the iPhone 3GS was a Nokia E90 Communicator, a top-of-the-line Symbian workhorse business machine. He’d spent so much time understanding how it worked, that the iPhone’s simplicity initially confused him. He’d ask how to access the file system so he could manage his data. Coming around to a task-centric model (photos are always available in the Photos app; music lives in the iPod data well, managed with iTunes) took awhile, but now that he gets it, the Nokia way is unfathomable. Managing a nested file system on a mobile device is no consumer’s idea of fun.

There’s always been the image of Macs being for stupid/lazy people who can’t work “real” computers and handle complexity in the user interface. Now the iPhone has inherited that reputation in the face of competition from Android, a system that David Pogue calls “best suited for technically proficient high-end users who don’t mind poking around online to get past the hiccups” in his review of the new Droid X. This became clearer as I got older, but I don’t consider most people over the age of 40 who struggle with technology to be stupid or lazy. It comes down to privilege, familiarity, and priorities.

One of Apple’s most prominent user experience attempts at improving accessibility involves mimicking real-world interfaces, such as using a yellow notepaper background and handwriting fonts in Notes, and superfluous flipping page animations in iBooks. Marco Arment has a good post on this: Overdoing the interface metaphor. It’s a divisive strategy that works well in the early stages of familiarization, but soon becomes a hindrance as one grows more proficient/confident. One of the best metaphors I’ve ever encountered on a mobile device was the lens cover on one of my old Sony-Ericsson cameraphones. Slide it open, and the camera application started up. Along with a physical shutter button, it was perfect, and my mother would have understood it instantly. Such a design benefits even experienced users who know how to start the camera up from the main menu. It’s easy to see how a physical feature can offer that experience, but the real challenge is finding that middle ground in software.

* I ended up taking the photo with my Panasonic LX3.